The mermaid pie came to me in a dream.

It began from a cookie that I saw on Facebook. A cookie so beautiful that it was shared again and again. It was of a woman breast feeding a child in mixed medium. I wondered it I could make a pie in a similar fashion.

I had never made a face on a pie before. I took the lessons I had learned in cake decorating and applied them to pie dough. I had been experimenting with using powder colours on pie dough prior to baking. They were set in the dough with an egg wash.

But, over and over, I knew my image had to be a mermaid.

I made a blueberry pie filling so that it would represent the water. The stylized waves were made with a pastry cutter. Bubbles in the background were made with circle cutters.

The mermaid was drawn on paper first and a pattern created.

If I was to do it again, I would make sure the image was in one piece, It pulled apart while baking a little bit.

The face I tried using the food markers for the details, however, the eyes blended together. I would say that it should be baked without eyes at first and then use the maker afterwards. The blush was added prior to baking as well as the lips. I think she aged a bit in the oven as well.

Most of all, I had fun making her.

Baking is a great stress reliever. 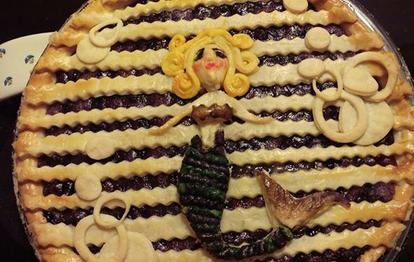