Following are some experiments that I completed. Scroll down to find out more.

The samples were then frozen overnight then taken out and brought to room temperature.

The potato and corn starches started to seep. The tapioca was too thick to move. No issues with Instant Clear Jel.

The Instant Clear Jel was the only one that survived the smear test as well.

Perhaps my opinion may be biased as I have used Instant Clear Jel for years. But, this test clearly shows it's superiority. I am sure that is why manufacturers have been using it for years.

Hope this helps with your pie baking.

Here are the samples after they have been refrigerated. The smear tests are new as well.

Potato and tapioca were jelled completely and failed to pass a smear test. They were lumpy.

Corn starch is still smooth, but seemed a bit watery around the edges. Not ideal as the crust will become soggy. 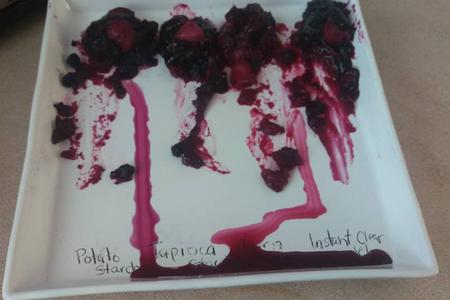 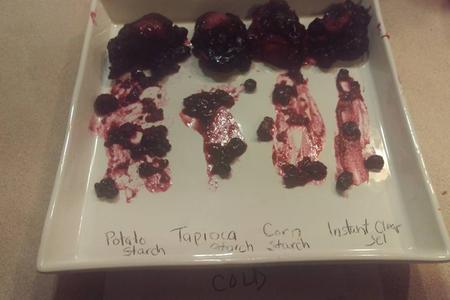 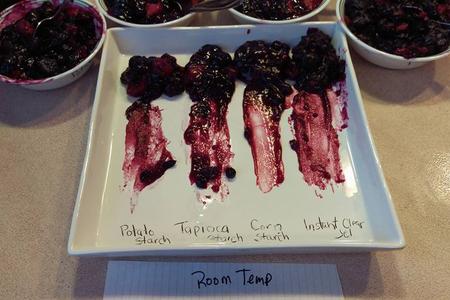 The Pie Baking Group asked about Instant Clear Jel and what was the difference between potato starch, tapioca starch, and corn starch. I thought it was a good time to find out.

I measured 2 1/2 cups of fruit, 1/2 cup water, 3/4 cup of sugar, 1/4 tsp salt, and 1/3 cup of starch, mixing the dry ingredients together. I brought the fruit and water to a boil before adding the starch and sugar mixture.

Above is the room temperature comparison and their smear test.

Potato starch - Mixing into the sugar it was lumpy. It took a couple of minutes to mix completely. It mixed into the fruit fine and thickened quickly. The liquid was a good colour. But, it stuck to the pan. Taste test at room temperature, the guys thought it tasted the best of the four.

Tapioca starch - Mixing into the sugar it was lumpy and was virtually the same as the potato starch, except it was too thick. Perhaps less starch would have been better. The texture reminded me of snot. It stuck to the pan as well.

Corn starch - It mixed into the sugar quickly with no lumps. It was easy to mix with the fruit and thickened quickly. It left a cloudy hue to the liquid. It did not stick to the pan.

Instant Clear Jel - It mixed into the sugar quickly with no lumps. Adding to the fruit it mixed and thickened instantly. The liquid was clear and it did not stick to the pan.

The smear test was fairly equal except the too thick tapioca.

The consistency of a pie filling is a bit of a preference. In general I use 1/3 cup of instant clear jel per fruit pie. You may use less if you like it a little bit runnier.